Classic car enthusiasts often find it difficult to obtain replacement badges, particularly for rare models. When one dental surgeon needed an engine badge for his Daimler, he solved the problem by taking an impression from the badge on a friend's car. From this, we were able to create a new casting which preserves the sand-cast texture of the original component. Unlike Daimler's badges, which were manufactured in chrome-plated brass, our badge was cast in solid Biosil 'f' cobalt chrome, which should long outlast the car.

Our casting now graces the dynamo cover of a 1963 Daimler SP250 "Dart", one of 2,645 manufactured by Daimler between 1959 and 1964, primarily for the American market. The engine is the standard 2.5 litre, 140 b.h.p. OHV V8 power plant which was developed for the model, and the badge now nestles in the 'V' of its cylinders. 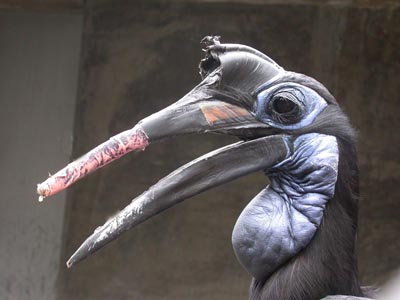 In the summer of 2004, we were asked to produce a prosthetic beak for one of London Zoo's African Hornbills. The bird's upper bill had been fractured in an accident, and the zoo required a durable and realistic replacement.