This technique uses a double-ended hinge incorporated into the casting, one end as part of the main casting, the other carrying the bolt and retention for the acrylic saddle. The action of the double hinge enables the saddle to swing into the undercut areas of the abutment teeth and soft tissue, where it is then locked with the bolt as shown in figs 3, 4, 5 & 6. The denture is now fixed and stable until unlocked by the patient.

The bolt, named after its inventor, E. Pullen-Warner, works in the same way as a gate or rifle bolt: the handle is lifted upwards and then pulled outwards to disengage, the reverse procedure being used to lock it. This design is optimised for posterior unilateral bounded saddle cases, upper or lower, and can engage very severe undercuts.

In response to interest from other technicians, Steve and David wrote an article about this technique. This appeared in the Dental Technologists Association's magazine, The Technologist, in June 2016. 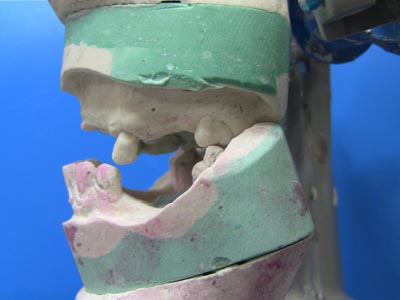 This case was first presented to Steve in 1993. The patient has a class 3 bite, as seen in figs 1,2 and 3, and wanted a denture made to present a class 1 appearance. Previous attempts had failed because the anterior teeth needed to be set so far forward of the ridge that they destabilised the whole appliance even with clasps. The challenge was to manufacture an upper denture that would be at once cosmetically pleasing, retentive and stable.